Kathleen Finlay, founder of the 988 Campaign for Canada, will be interviewed on the CTV News Channel anchored by Angie Seth. 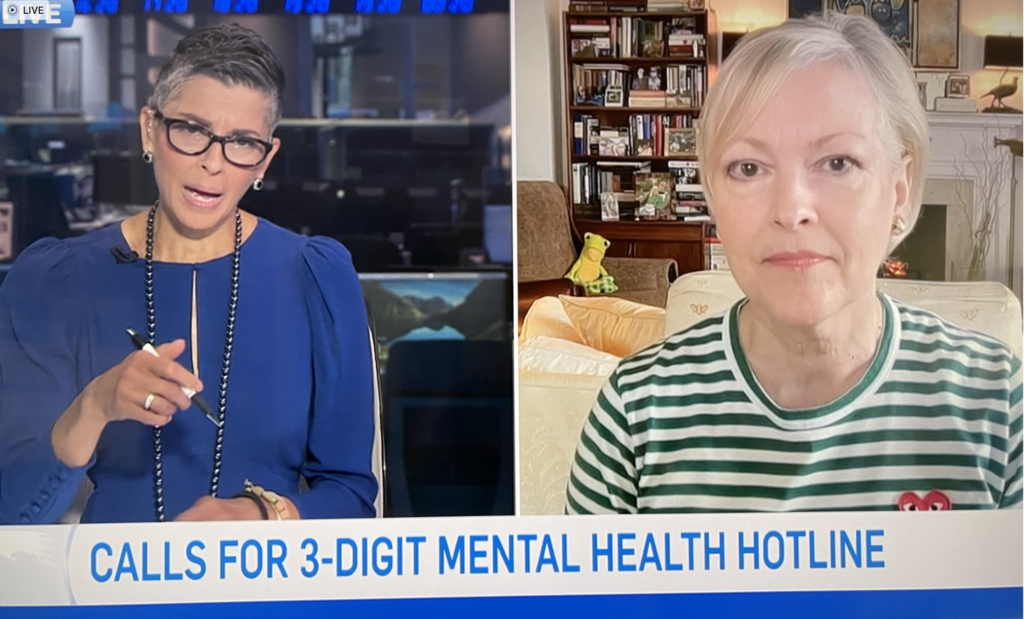 Kathleen Finlay talks about her  campaign to bring 988 to Canada on CBC National News and the World at Six. 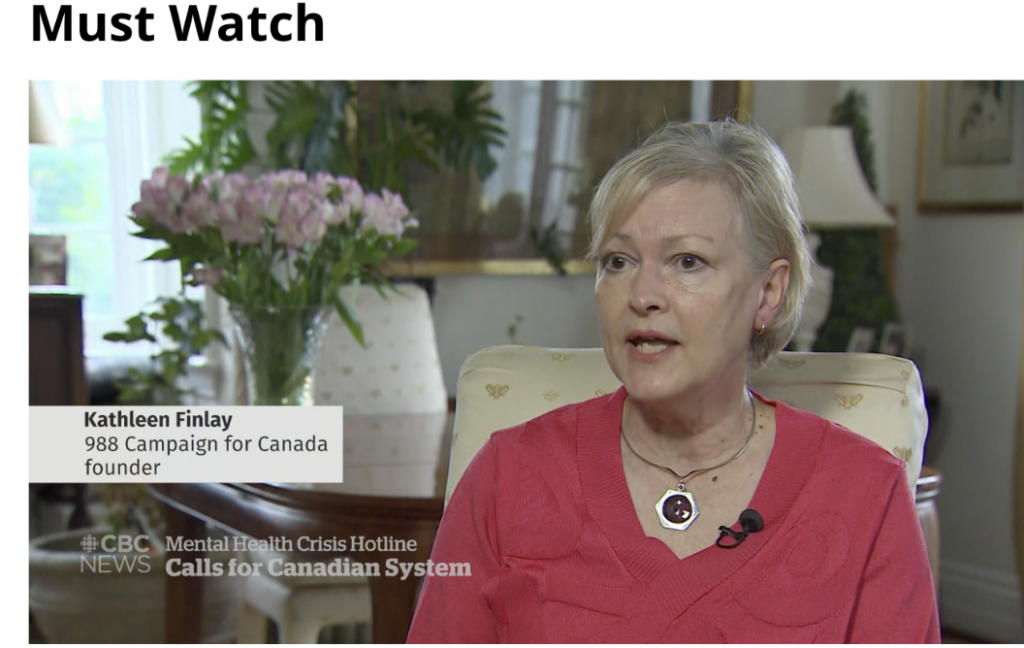 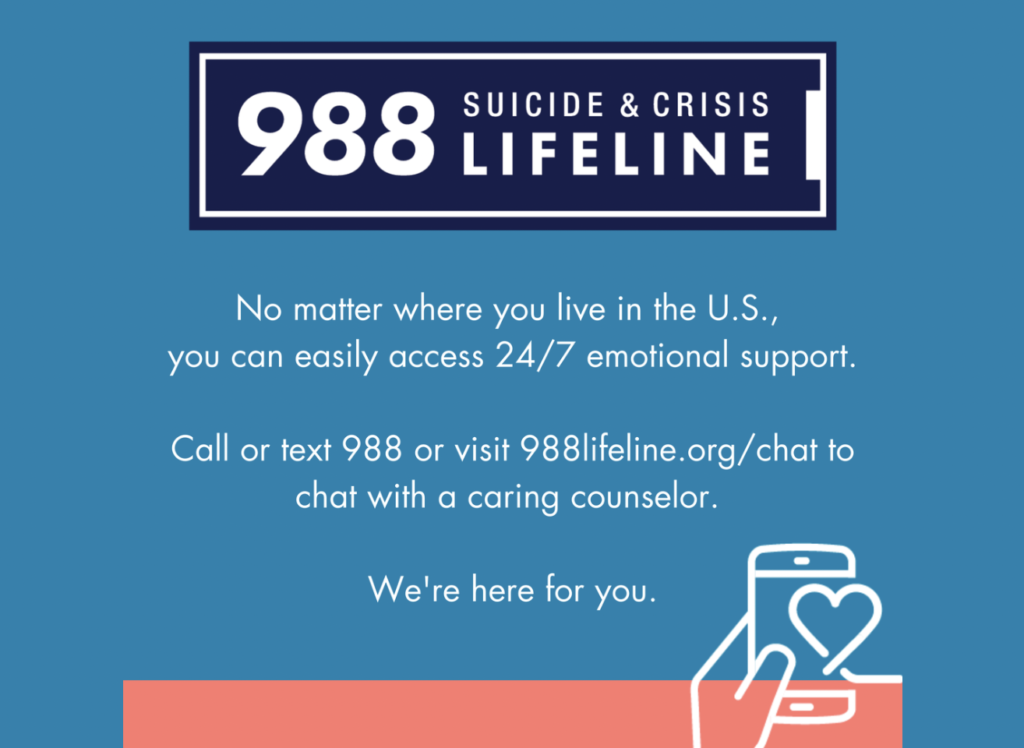 Our national hotline, which I proposed more than three years ago when I created the campaign to bring 988 to Canada, might have been up and running, too. After ignoring my calls for more than a year, Canada’s political leaders and mental health establishment finally decided to jump on board — after pushing me, and all the families whose voice I had become, off the train.  If you ever wondered why Canada’s mental health system is broken, here’s a good example.

As many as 11 Canadians die from suicide every day.  Several times that number try to end their lives, every day.  These tragedies are preventable. But help in Canada has been slow in coming. Here’s why.

When I launched the campaign to bring 988 to Canada three years ago, it started as a single voice – mine.  It was an exciting idea in a country that desperately needs better ways to reduce the risk of suicide.

Through countless op-eds and media interviews, and eventually a segment on CTV National News, I tried to get the attention of politicians and mental health insiders.  I wrote to MPs, ministers of health, government leaders and mental health experts. Nobody was interested.

Many months later, my campaign eventually caught the attention of a few politicians who saw it as a platform to advance themselves. They took over the campaign to bring 988 to Canada, and even parroted words and phrases from our website. Then the mental health establishment came on board, followed by the bureaucrats.  The same organizations that had ignored my repeated efforts to get their support for 988 now did everything they could to keep us out of the picture.

When you take the source of an idea’s energy and imagination away, it’s not surprising that it gets bogged down and loses momentum. That’s what happened with 988 in Canada. It might have been up and running by now and saving lives.  Instead, it’s stumbling along in the halls of slow-moving bureaucrats and unimaginative mental health authorities. Even now, they’ve missed some key features of 988’s potential to make it an even more powerful tool for saving lives in Canada than it will be in the U.S.

Saving lives from the grip of suicide is personal for me, just as it is to thousands of Canadian families. I lost my father to this preventable disease.  I put thousands of dollars of my own money into the campaign, built a dedicated website, created a unique twitter hashtag and spent hundreds of hours reaching out, trying to get 988 to see its full potential as quickly as possible. It was a way of healing for me, as it was for the other families across Canada who have written to me over the years to express their support. But it has turned out to be something entirely different than a healing experience. It’s given a glimpse into why Canada has such a dysfunctional mental health system.

The campaign to bring 988 to Canada is just one of many initiatives and proposals I have made to improve the quality of mental health delivery over the years. It is by far the most important in its potential to save lives.

And here’s something else that’s long overdue: a serious look — perhaps through a national inquiry by Canada’s senate — at this country’s publicly-funded mental health establishment and the policies that cause Canada to lag on so many fronts. It’s too much like a closed club to do the job that the mental wellness of Canadians requires.

When it comes to mental health, treating individuals with a sense of inclusiveness and respect for their dignity are key to successful outcomes. You don’t do that by marginalizing people and ghosting them as if they never existed. If those in charge of our mental health infrastructure don’t understand that, they need to find another line of work.

If you support 988 for Canada and want to see it reach its full potential —and soon— let me know.  You could make a difference in saving lives.

How you can show your support for 988 in Canada.  And get it moving fast.

Write to Hon. Carolyn Bennett,  Canada’s Minister for Mental Health and Addictions.  Tell her you support the urgent roll out of 988 for Canada. Here is her email address.  Write to your MP and Prime Minister Trudeau. Use your social media account to voice your support.  On Twitter, use #Bring988toCanada.  Reach out to members of the media on social media as well.  And make sure you contact us at the 988 Campaign for Canada. Every day dozens of families who have lost loved ones to mental health crisis write to show their support for 988 in Canada. They know it will save lives.

The 988 Campaign for Canada, and the Twitter hashtag #Bring988toCanada we created, are dedicated to the families of the victims who have been tragically lost.  May their memories be a blessing and serve to bring about awareness of the changes that are needed to deliver the mental health support Canadians deserve.